A new course, a new venue but many of the old faces!

The Easter Recorder Course very skillfully organized by Pam Smith (Musical Director) and Jan Epps (Administrator) under the auspices of the newly-formed, not-for-profit organization ‘Recorders for All’ was a resounding success in every sense of the word.  Following the demise of the long-established, Northern Recorder Course there was definitely a gap in many of our calendars.  We have to thank Pam and Jan for finding such a good venue and attracting back many of the same tutors and participants whilst ensuring space for new faces both amongst the tutors, Sophie Middleditch and the course participants.

The venue, a large Christian conference centre set in beautiful grounds, with en-suite bedrooms throughout was very comfortable. The staff were extremely helpful and obliging, their experience in running conferences was very evident in the whole ethos and management of the centre. The windows of my room overlooked a large lake, whilst close to the main house there were some beautifully maintained formal gardens.  The rooms available for us to play in were more than adequate, relatively close to one another and with reasonable acoustics.  Whilst we were there many other groups passed through from Catholic Nuns and the Salvation Army through to a wind band from the Royal Northern College of Music preparing for a competition in Manchester.  At times, though perhaps not often enough, there was interaction between ourselves and members of other groups, when we were all using the same facilities such as the bar or taking a stroll around the lake.  To my mind having other groups amongst us was definitely an asset rather than a cause for friction or animosity.

During the day there were five playing sessions each an hour and a half long, two in the morning, two in the afternoon and the final evening massed playing session.  The morning began with a choice of five different tutorial groups ranging from Renaissance Reeds to Jazz on the recorder.  Unlike many other courses, where once committed to a tutorial group you are expected to stick with it for the week, here you could mix and match on a daily basis if you were so inclined. I chose to spend my week learning about and playing music from the Eton Choir Book but I know others ventured into two or more sessions as diverse as Baroque duos and Jazz.  The second session before lunch included the traditional recorder orchestra conducted by Pam Smith, whereas later in the day Sophie Middleditch tutored the chamber orchestra, a small group of highly experienced and proficient players playing one to a part.  There was however, something for everyone to enjoy, sessions playing music arranged for two or more choirs, sessions which explored more modern music such as Fantasia Ritmica written by Egon Ziesmann and published in 1998, as well as sessions where you could learn or improve playing from the bass clef, experiencing maybe for the first time, how it feels to play a great bass or contra.  There was also the chance for many to sign up to play music accompanied by a spinet and tutored either by Rosemary Robinson or Ruth Burbridge.  Having the day divided into 5 sessions rather than the more common format of 6, ensured a more relaxed feel to the course whilst providing tutors more time to explore the music they had chosen. It did however mean that participants were loath to take a session off.  Maybe that too is a good thing!

All the tutors showed enormous enthusiasm for the music they were conducting. The evening sessions were so well organized with music on chairs in advance, limiting the ‘faff’ – so often a feature of massed playing, thus providing more time to explore the music and increasing the overall enjoyment.

So I am sure that I speak for all of us who were there when I say: “Thank you Pam and Jan for all your hard work and see you next year!” 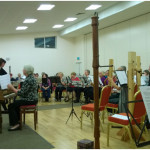 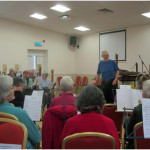 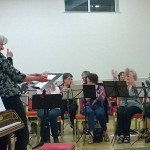